The Basilica of St Patrick,

Finlandia combines two musical forces of great magnitude: The Royal Agricultural Society of WA Brass under the baton of Dr Alan Lourens meets the might of WA’s largest pipe organ, housed in the Basilica of St Patrick in Fremantle, played with gusto by organ virtuoso Dominic Perissinotto.

The concert program features Arthur Wills’ The Fenlands ‘Symphonic Suite’, Jean Sibelius’ majestic Finlandia, and a work from Norway, Nåde (Mercy), complemented by works for brass and organ, as the organ mirrors the luscious sonority of the brass band.

As Western Australia’s premier brass ensemble, The Royal Agricultural Society of WA Brass provides music in all styles – from traditional hymns, marches and contest music to light classics, popular and specialty music. RASWA Brass has wooed local audiences for more than 50 years and features Dr Alan Lourens as its Musical Director. Alan is also Head of the School of Music at the University of Western Australia, where he directs the Orchestra, Wind Ensemble and Brass Ensemble.

Dominic Perissinotto’s performance at the organ will be projected onscreen via two cameras, one for his hands and the other for his feet, fully displaying his incredible skill and ability as an organist as he works through compositions spanning two centuries of European music.

Pipe Organ Plus is a long-running concert series pairing the organ with an array of sublime musicians and artists, performing in majestic Western Australian venues, exploring the full spectrum of music from medieval to modern. All concert events feature complimentary interval refreshments, affording the audience time to talk with other concertgoers, as well as meeting the performers.

Concert tickets available via pipeorganplus.com or at the door from one hour prior to the start time. The concert runs for approximately two hours, including an interval where complimentary refreshments will be served. 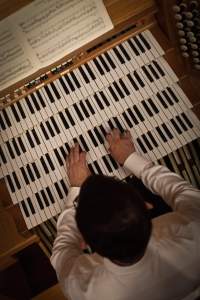